Cats in Gardens are a No-no! 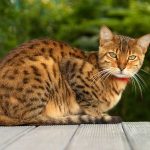 Felines are unpredictable, so there are few sure-fire cat repellents. Here are some of the best approaches known to stop strays and family feline intruders from using your garden as their own personal litter box.

New Garden Beds  –  On newly prepared beds cover the soil in a layer of chicken wire to prevent cats from digging in the otherwise inviting loose soil.  Bulbs and plants will grow through the wire, but cats don’t like that it irritates their paws.  Wire also is highly effective against javelinas.

Fence them Out – Cats can jump almost any fence, but not an electrified barrier.  A 12-volt wire strung just 12” above the garden’s soil thwarts not only cats but rabbits and javelinas as well.  Put the electric fence on a timer, and only have it activated dusk-to-dawn when most of these animals are on the prowl.

paws.  We know that cats are pretty fussy, especially about water. They hate getting wet!   Getting wet seems to be a phobia in almost all cats.  Play on that phobia in trying to keep cats away from where they’re not wanted.

When you catch a cat in a forbidden area, hose down the intruder with a Super Soaker or similar water gun. Such action usually reinforces the notion that they are unwanted in that bed.   If that doesn’t work, go hi-tech. Devices such as Orbits Yard Defender is the only motion sensor soaker that works both day or night and really works.  Yard Defender detects an unwanted presence and fires a blast of water at it!  Water is “Kryptonite” for cats!

Offend their Sense of Smell – Cats are equally fussy about how things smell.  This feline characteristic can be used to keep cats away from where they’re not wanted.

Watters has a highly effective commercial cat & dog repellent called “Cat & Dog Stopper”.  An organic powder, it smells of herbs like castor oil and peppermint oil that cats hate to lick off of their feet.  It’s even safe enough to use indoors for mischievous kittens playing in your houseplants. Safe for birds, cats, and plants.

Plants that Repel Cats – Some plants naturally repel cats.  Often recommended for keeping cats away Scaredy-Cat Plants for yards are: geranium, rue, lavender, rosemary, pennyroyal, castor oil, peppermint, and most other herbal plants.  Coleus Canina is known by the name, “Scaredy-Cat Plant.”  However, as the Latin name suggests, it’s also effective at keeping dogs out of the landscape. (I will be doing a separate article for keeping dogs out of the garden, so watch for more to come on that topic.)

Make Cats Pussyfoot – Cats don’t like to walk on bristly surfaces. Cedar bark mulch, which has a natural repelling effect on cats and insects, can be made “bristly”.  Simply add some sharp-edged pine cones to the mix and make those cats avoid pussyfooting through your garden.

Stone may be a less esthetically pleasing mulch, but it also is less attractive to cats. They much prefer to walk across fluffy soil than over gardens covered in stone.  They would rather trespass where the digging is easier on their paws.

Catnip near a Sandbox – Sometimes a strategic plan provides the best solution to a cat problem. Compromise with your cats by planting a separate bed of catnip plants away from your display gardens.  Most cats love catnip and will make a catnip plant their own private sanctuary and a favorite hangout, keeping them away from that new vegetable garden.

Better still, create a sandbox just for cats and keep it in close proximity to the catnip plants. You will have to clean the litter, but at least you’ll know that they’ve NOT left their calling cards where you don’t want them!

Irritate the Ears – Ultrasound devices such as PestAway Ultrasonic Outdoor Animal & Cat Repeller  operate on a high frequency. The sound is inaudible to humans but 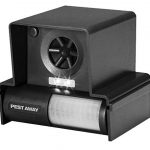 unbearable for cats. Installation is easy; simply situate the device so that it faces toward the garden. The Pest Away motion sensor detects the intruder’s presence and then gives off its high-frequency sound, scaring off the cat.