About Our Christmas Tree Tradition

The day after our girls arrived home from college we all made the annual trek to the garden center to select our family Christmas tree. Setting up and decorating the tree is a special time at the Lain house. As usual, the occasion consists of eggnog, ornaments, and good stories reflecting our fondness of the season.

A survey conducted by the American Christmas Tree Association revealed that more than 94 million trees will be used by Americans this year. Of those Christmas trees displayed, 81 percent will be artificial and 19 percent will be harvested from nature.

Of course, the Lain household is part of the 19% that decorate a real tree. Hey, we own a garden center so to put up a tree-shaped piece of metal covered with plastic needles is unfathomable to us! Year after year, after the boxes of decorations are brought up from their basement storage, an indescribable parental joy comes from watching the kids unwrap each ornament, reliving the magic and excitement of each decoration. With ornaments from our childhoods, from our travels, and handmade baubles from family and friends, these decorations are like a family album hung on the tree. Once the Christmas tree is decorated, it is the welcome sign that this beautiful, joyous season is here again.

Most Americans don’t know where the Christmas tree tradition came from or what its original meaning was. With a rich history dating back thousands of years, its story is filled with both love and disdain.

Bringing evergreen plants indoors during the winter has an early inception. Thousands of years ago evergreen branches were hung over doorways and windows during winter to remind people that the liveliness of spring would return.

The ancient Egyptians worshiped Ra, c. 2300 B.C.E, a god who had the head of a hawk and wore the sun as a blazing disk in his crown. During a winter solstice, the shortest day of the year, it was said that Ra began his successful recovery from a seasonal illness. Egyptians then filled their homes with green palm fronds in celebration of Ra’s triumph over death and the lengthening of days heralding spring to come.

Early Romans marked the winter solstice with a feast called Saturnalia in honor of Saturn, the God of Agriculture. The feast meant that soon farms and orchards would be planted, their crops becoming green and fruitful. For the festivities Romans decorated their homes and temples with evergreen boughs ornamented with small bits of metal.

The traditional decorated Christmas tree, as we all know it, originated in Germany in the 16th Century. Devout Christians built pyramid-like structures and decorated them with evergreen branches and candles. It is said that the pyramid shape and, later, the triangular form of the Christmas tree symbolized the Holy Trinity of God the Father, Son, and Holy Spirit. 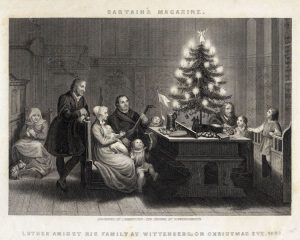 Martin Luther, the 16th Century Protestant reformer, is said to be the first to illuminate a tree. One night while walking home, developing a sermon in his head, he was mesmerized by the bright stars above twinkling through the evergreen trees. Inspired to recapture this scene for his family, he brought a tree into his house and decorated its branches with candles. Initially Americans found the Christmas tree strange. The first record of one being on display in the 1830’s was by German settlers in Pennsylvania and was not accepted by most Americans. The tree was regarded as a symbol of Paganism. Christmas was sacred to the New England Puritans and their leaders were adamant about stamping out any “mockery” of this sacred event. There even were laws that penalized anyone who did anything on December 25th that was not a church-related activity or gesture. In some towns people were fined for hanging decorations.

In 1846 the ‘Illustrated London News’ featured a sketch of England’s popular Queen Victoria and her German Prince Albert standing around a Christmas tree with the royal family. What was popular in the Royal court soon became popular in mainstream American east coast societies. Thus, the decorated tree became a focal point of an American Christmas.

By the 1890s Christmas trees were being commercially grown and sold and ornaments arrived in America directly from Germany. It became a status symbol of the time to have glass ornaments on the tree. In the shantytowns of the American West, it was not easy to find imported decorations. People made their own ornaments by piercing tin to create lanterns that held candles. By the turn of the century the Christmas tree had caught on everywhere, and Americans were decorating their trees with homemade ornaments and garlands of popcorn interlaced with berries and nuts. 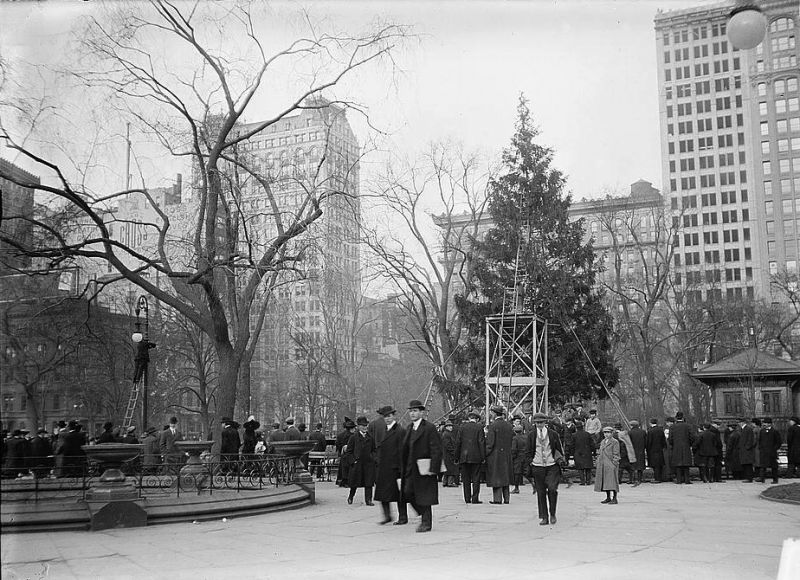 New York City was the first city to erect its own tree in 1912. With the invention of electricity, Thomas Edison and Edward Johnson were the first to create a strand of Christmas lights. This meant that the trees could glow for days and weeks, so town squares began erecting their own community trees. Community trees since have become symbols of unification, lifting morale during times of war and other difficulties.

Yes, we still have both cut and living trees available at the garden center. They are fresh, pampered, and filled with the fragrance that so glorifies the season.

Ken Lain can be found throughout the week at Watters Garden Center, 1815 W. Iron Springs Rd in Prescott, or contacted through his web site at www.wattersgardencenter.com or Facebook page www.facebook.com/WattersGardenCenter .