So, you want to start on the exciting journey of growing a tremendous pumpkin that impresses the neighbors, friends, and may even impress the gardener within?  It all starts with the right kind of seed, one that is selectively bred to produce really big pumpkins. 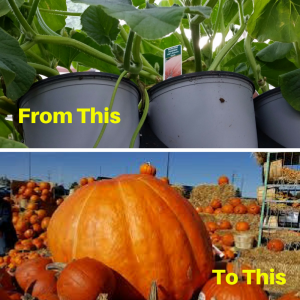 Watters’ specially grown Atlantic Giants easily can reach the 100+ pound range, and several are recorded to have topped the 1000+ pound mark.  These really huge pumpkins are rare without extreme care from their gardeners, but anyone can grow a plain ol’ huge pumpkin, and here’s how.

We live in a part of the country where frost is likely in early May so start pumpkin seeds indoors about three weeks before the last frost.  Sow one seed for every pot filled with ‘Watters Potting Soil.’   Keep the pots watered, never letting them dry out completely. Pumpkins are very expressive and will let you know what they want; they wilt and droop when they need to be watered!

Although pumpkins like and need a lot of water, don’t plant them in a wet or dense soil. They need good, well-drained soil.  Prepare the ground in early spring, as soon as soil is thawed and warm. Fertilize the patch with four inches of Barnyard Manure.  Blend the manure layer into the soil down to one shovel’s depth.  At the same time add Watters’ “All Purpose Plant Food” 7-4-4 for nutrition that lasts.

Reduce the need for aggravatingly frequent watering by blending Aqua Boost Crystals into the soil.  Use 10 tablespoons in the soil surrounding each new seedling.  These water-retaining crystals keep moisture at root level and promote deeper roots for each plant.

Pumpkins need a lot of sun, so choose the sunniest place in the garden.   Also be aware that pumpkins are sensitive and will need shelter from wind, frost, and hail.  This ensures that all their energy is sent to the fruits, rather than expended on battling the elements.

When seedlings show a fourth or fifth leaf, set them outdoors in hills about the size of a pitcher’s mound, one plant to each hill. Space hills 10-15 feet apart.  In a raised bed, place your seedlings at the edge of the bed so the vines can spill out in the direction of your choosing.

Pumpkins have two kinds of flowers, male and female. In early July the male flowers set first, soon followed by the females. A female flower has a baby pumpkin at the base of each bloom.  Wait until vines are vigorous and 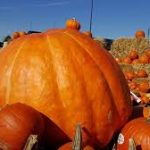 well-established before letting a female set fruit. It helps to break off the first female on each vine and wait for the second or third to develop, usually when the vines are at least 10 feet long.

You are choosing the vine for a large, heavy pumpkin, and the strongest, longest vines produce the largest pumpkins. When a female flower is on the verge of opening, put a bag of cheesecloth over it to keep out insects. The morning she opens, pick a fresh male bloom, trim off the outer petals, and rub the pollen-laden stamen into the center of the newly opened female flower.  This trick guarantees good pollination for a truly large pumpkin.

Each plant will have 100+ leaves to each vine, and if you are trying to grow a 300-pound pumpkin, each leaf is responsible for up to four pounds of the pumpkin’s weight. Every leaf, every stem, every part of the plant is now receiving sunlight, absorbing water, and blending nutrients to develop a prize-sized pumpkin.

Precautions must be taken so the large pumpkins won’t tear away from their stems. Since each vine puts out roots at every point that has a leaf, tear out the roots of the vine where it is close to the pumpkin. This gives the pumpkin space to grow without damage to the vine. Gently train vines away from the pumpkin to prevent crushing of the stem.  Encourage the stem to grow in the direction of your choosing.

When two or three fruits on each plant reach the size of softballs, remove all but the most promising one, and start to prune your plants. Break off all other female flowers, so all nutrients and water go toward growing that huge pumpkin. After the first vines have reached 20 feet, pinch off the tips and the side shoots, forcing all energy directly into the chosen pumpkin.

By mid-August, the plants will be absorbing enormous quantities of water and nutrients. Nighttime is when pumpkins do their growing, most expanding two inches in circumference every night!

Each year our July and August monsoons vary in the amounts of rain they deliver.  If we have a dry season, give each plant 15-20 gallons of water twice a week. Water in the evening, and water only the base of the plant to keep the leaves dry.  Dry leaves reduce the risk of mildew and disease.

Near the end of September, you will know the excitement of a truly large pumpkin.  Harvest it to show off in October, or to enter in a county fair.

With these tips and tricks, you are assured at least a BIG pumpkin, with potential for a REALLY BIG pumpkin!  Most kids and adults are impressed by even a “small” pumpkin coming off one of Watters’  Atlantic Giants plants.

Until next week, I’ll be here at the garden center helping customers with their plans to grow really big pumpkins.