Health Benefits of Apples and so Easy to Grow 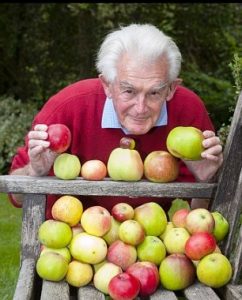 apple and hot apple cider makes my mouth water. With so many apple recipes to enjoy, why not plant an apple tree that celebrates the season every fall to come?

“An apple a day keeps the doctor away” is an old Welsh proverb that most are familiar with, but what makes this fruit so special? What health benefits are associated with growing and eating apples?

A medium-sized apple contains 4 grams of fiber. Some of that is in the form of pectin, a type of soluble fiber that lower levels of LDL or ‘bad’ cholesterol. This blocks absorption of cholesterol, according to WebMD, helping the body to use it rather than store it.

Apple’s wealth of fiber can also keep you feeling full longer, without costing a lot of calories. It takes your body longer to digest complex fiber than more simple materials like sugar or refined grains.

One component of an apple’s peel, which also has most of the fiber, is something called ‘ursolic acid’ linked to lowering risk of obesity. It boosts calorie burn and increases brown fat and muscle.

Five or more apples a week, that’s less than an apple a day, has been linked with better lung function, most likely because of the antioxidant ‘quercertin’ found in the skin of apples, as well as onions and tomatoes.

And the breath benefits of apples extend even further. A 2007 study found that women who eat plenty of the fruit are less likely to have children with asthma.

While they don’t quite rival oranges, apples are considered a good source of vitamin C, with over 8 milligrams per medium apple, which amounts to roughly 14 percent of your daily recommended intake.

In 2004 WebMD reported a French research found a compound in apples that helped prevent colon cancer. And in 2007, a study from Cornell found an additional compound called ‘triterpenoids’, which seem to fight against liver, colon and breast cancer.

A 2012 study published in the American Journal of Clinical Nutrition found apples, pears and blueberries were linked with a lower risk of developing type 2 diabetes.  ‘Athocyanin’ a class of antioxidant was responsible and the cause for reds, purple and blue colors in fruits and veggies.

Apples have been linked to an uptick in acetylcholine production which communicates between nerve cells, increasing memory function and lowering your chance of developing Alzheimer’s. This one  potential benefit, along with their taste good, is good enough for this gardener to start eating more apples.

Apples are oh-so-easy to grow in mountain gardeners as well.  Choose your favorites, and I say favorites, because apples need two different varieties grown in the same garden to pollinate correctly. Apples need a buddy that helps them pollinate and produce more apples.

Local harvest is impressive this year, with many fruits ready to be picked.  If apples are more appealing than ever in the garden, fall is the ideal time to plant a new tree.  Watters Garden Center has the local experts to help companion plant your apples and maximize the harvest. Visit for the grand tour of apple trees.

I’ll see you at the garden center, near the Apple Trees.