How to Use the Local Plant Hardiness Map

We, gardeners, have come to rely on USDA Hardiness Zone Maps to tell us which plants will survive and thrive locally. The USDA released updated Plant Hardiness Zone Maps for the United States in 2012. Plant zones are based on the average annual minimum temperature over a 30-year period, not the lowest temperature ever in each zone.

Zone maps don’t dictate steadfast rules but are guides to supplement other garden factors like soil quality, sun exposure, moisture, and sudden or prolonged temperature swings. These combined variables for their respective zones indicate how well plants will perform in each area.

Variations within a hardiness zone are called microclimates. They can exist even within the radius of a single yard! Trust your familiarity of your property and your gardens to know where microclimates exist.

You can download the USDA Plant Hardiness Map Site here.

Resolution of the most recent map is noticeably improved. Mapping was enhanced by using a Geographic Information System (GIS). The clearer, higher resolution makes it easier to see the distinction between zones. It also makes it possible to separate into specific zones small anomalies cooler high elevation areas, areas near large bodies of water, and cities, which tend to be warmer than their surrounding areas.

The 2012 map was the first designed to be viewed via the internet. Zones can be zoomed in on for a closer look of a specific zone. A more sophisticated algorithm was used to compile low-temperature values from actual weather reporting stations.

The zones are based on 1976 – 2005 weather data. The previous map was based on 1974 -1986 data. The 30-year period was chosen to accommodate year-to-year fluctuations and variations. A trial check on more recent data showed no measurable difference between the earlier and more recent zone evaluations.

Climate changes usually are based on weather averages in a 50 – 100 year period. This map uses only a 30-year average and is not meant as evidence of temperature changes. While most zones on the new map are ½ zone warmer than the previous map, the change can be attributed in part to better mapping and weather tracking. The USDA points out that some mountainous regions that had been hard to observe are now in cooler zones.

Interactive Map – This link to the USDA interactive map can use a zip code to get a zone number, the average temperature and/or the temperature range for that zone.  The longitude and latitude of a zone also are available. Be careful:  “playing” with the map can be addictive!

In the mid-1900s, the U.S. Department of Agriculture (USDA) mapped out the entire United 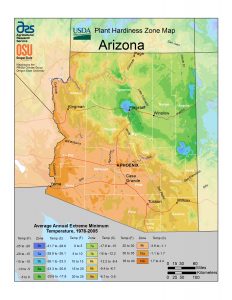 States, Mexico, and Canada by lowest annual minimum temperature groupings. Each zone represented a 10-degree F. difference. This was invaluable advice for the agriculture industry of that time. Plants could be rated by hardiness zones, taking costly guesswork out of choosing best plant varieties for different areas.  Home gardeners, too, had a reliable gauge, other than practical experience, for choosing plants.

Over the decades, with use of improved measuring techniques, the maps have been revised to reflect changes in climate. When cities and towns were reassigned from one zone to another, gardeners were left to wonder what would happen to their existing garden plants. While our climate may be shifting, these changes did not occur overnight. Plants are adaptable, surviving in slightly different climates. Luckily, our plants can’t read changes made in updated maps!

In 1990, the zones were divided more specifically, each numbered zone being broken down into an ‘a’, the lower temperature end of the zone, and a ‘b’, the higher. Unfortunately, plant breeders have yet to start using these distinctions on their plant labels, so they are mostly useful if a gardener wants to push the envelope a bit. A gardener in zone 6b will be tempted to dabble in 7a plants. Given the variability within any climate, it’s a hit and miss situation.  It’s what I call gardening.

The American Horticulture Society (AHS) introduced a Plant Heat-Zone Map in 1997, intended to supplement the hardiness map. Heat-related problems are much harder to quantify. High summer temperatures only told half the story. Plants don’t usually react to a day or two of heat the way they might respond to a frost. However, plants subjected to a two-week heat wave could very well not survive. Other variables that weren’t considered were humidity levels, nighttime temperatures, and rainfall.

The Southwest map is shown here. You won’t get as much detail from the regional maps, but you do get a sense of microclimates and how zones are affected by their geography. Within miles of each other, higher altitudes in the mountains and coastal areas of Arizona can be 2-3 zones cooler than urban and desert areas.

Let’s face it, the only hardiness zone we usually are interested in is our own. Each state has an individual map that shows the gradual changes in hardiness from one area to another. There’s an interactive map where you can get your zone, actual average temperature, the temperature range for your zone, and longitude and latitude of your area. It includes a Zip Code Lookup at the top of the page.

Here’s the link where you can download all the individual state maps.

Central Yavapai County is a zone 7 to 8, with the ridgeline dipping to a zone 6.  This means we need those plants that can take the cold of winter below 10 degrees F.  Chino Valley, Prescott Valley, and Prescott are all the same zone. As Watters’ shoppers read plant labels, hardiness zone numbers are good guides to making selections.

Big mistakes are made by gardeners coming from desert or coastal areas and not realizing how cold affects plants.  Cactus brought up to the mountains from desert nurseries will thrive in the summer heat, but quickly turn to black mush as freezing weather hits ’em, never to live again.

Best advice for Arizona mountain gardeners is to verify your hardiness zone.  As you shop for plants at the garden center confirm the hardiness zones of plants before you buy.  Plants with a lower hardiness zone or numbers will grow in your gardens.  Those with higher zone numbers should be treated as annuals, they generally will not survive winter conditions in our area. Stick with plants that can grow in zones 4b to 8a and they should tolerate our mountain winters.  Those plants rated 8b and higher are likely to die from winter cold.