Mushrooms – Friends or Foes to Lawn and Garden?

Mushrooms growing in the lawn, on mulch, or in the garden may make you wonder if something is wrong. Often our first instinct is to get rid of ‘shrooms, but mushrooms growing in your lawn or garden are signs of a healthy soil containing lots of organic matter.  Beautiful works of nature, mushrooms are hugely beneficial to a garden.  Fungi decompose garden organics into usable foods for plants, they break down complex organic compounds like those in dead leaves and wood chips, and mulch into substances plants can use.

A good example is a rotting tree stump. Mushrooms will colonize around and on the tree stump, helping it break down into a rich, crumbly loam that plants will use to root and grow.

Most mushroom activity takes place below the soil’s surface. The toadstools ruining your

view are just the fruiting bodies of a sub-surface, much larger, intricate network. Mushrooms send out a network of filaments call hyphae that join in a symbiotic relationship with plant roots. Plants enjoy many benefits, not the least of which is increased surface area on their roots, and the fungi access carbon from the plant, which they need for growth. This mutually beneficial relationship is called mycorrhiza. Some of its known benefits to plants include:

Increased ability to take up water and nutrients from the soil.

Accelerated growth rate of plants at every developmental stage.

Mycorrhizae aren’t just good for plants, they also improve the soil. They improve soil structure while increasing drainage, and even suppress soil-born diseases. Mycorrhizae are increasingly used to improve poor soil, even to repair contaminated soil.

How to Get Rid of Mushrooms in the Yard or Mulch

Mushrooms are opportunistic and when their spores land on some nice, damp organic matter, they take hold. There are places where you just don’t want to see mushrooms dotting the landscape and you don’t need to feel guilty about getting rid of them. Their hyphae are probably so deep in the soil that lopping off the aboveground portion won’t really hurt them.

Fungicides like Bonide’s ‘Infuse’ offers very temporary relief, but rather than upsetting your soil’s balance with a fungicide try raking up and burying the mushrooms. You will have to do this several times before they get the message. If possible, let the soil dry out in the area to discourage regrowth.  Better yet, add them to the compost bin where they really will be appreciated.

A final word of caution: If you do have a lot of mushrooms popping up and you have small children or curious pets, make sure they don’t mistake them as a snack. In this instance it might be wise to remove them.

Scientists are still studying the different types of mycorrhizae, their relationships between specific fungi and plants, and how we can encourage this association.  Watters Garden Center is now making soil additives that encourage, even repopulate mycorrhizal colonies in garden areas.  Aqua Boost is just one of the local new products that not only increases root formation of plants, but holds water at the root level for healthier plants.

FYI – What’s the Difference between Mushrooms and Toadstools?

The terms “mushroom” and “toadstool” are not really scientific classifications. There are 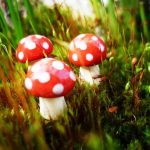 many thoughts on how to differentiate between them, most commonly with mushrooms being edible by humans and toadstools being toxic.  Technically, “mushroom” refers to fungi in the genus Agaricus, like the white button mushrooms in the grocery store, and “toadstool” refers to all other fungi whether edible or not.  The terms are so often interchanged that this distinction has become moot.

Fairy Ring mushrooms in the lawn. 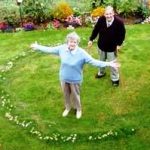 occurring ring or arc of mushrooms.  The rings can grow to over 10 yards in diameter.

Fairy rings are the subject of much worldwide folklore and myth. While they often are considered hazardous or dangerous, fairy rings often are linked with good fortune.  The most familiar belief is that at night little fairies will dance the night away in the circle, resting on toadstool “chairs” between dances.

To homeowners plagued with fairy rings dancing is often the last thought on their minds because of the resulting inconsistent grass color. Mushrooms are a common sight in many lawns, especially during wet, warm periods. Normally, mowing or kicking them away can control them. If they reoccur in the same spot every year, then it may indicate the location of an old tree stump or other decaying organic material. When mushrooms appear in an arc or circle, it indicates the beginning of a fairy ring. No one knows for sure how this phenomenon starts or what conditions favor its development. It seems to be more prevalent on soils that are sandy, under-watered, or are poorly fertilized.

to the area to even the color. In the areas where the grass has died, water penetration

needs to be improved. Make aeration holes in the ring with a garden fork to a depth of 12–24 inches and then thoroughly water the area for 4 to 6 weeks.

If the rings are severe, it may be necessary to remove the sod and repeatedly cultivate the area for several weeks before re-sodding or seeding the lawn. Mixing the soils of two opposing rings seems to cause them to cancel out each other. Regardless of the method used, it will be a difficult task to get the rings under control.

A healthy, well-maintained lawn is the best defense.