(February 12, 2016 ) Prescott, Arizona – Pocket gophers are digging up local gardens at an alarming rate. These burrowing rats live underground, destroying gardens by chomping plant roots and ruining soils by destroying worm counts and beneficial fungi. Their devastation includes decimating tree roots to the point that large trees can blow over in one of our powerful spring windstorms!
Recently, although far from funny, it was almost cartoon-like to watch a broccoli plant in my garden disappear “subterranean style” and vanish as though it had never existed. Ken Lain, “Then one of my shrubs fell over during 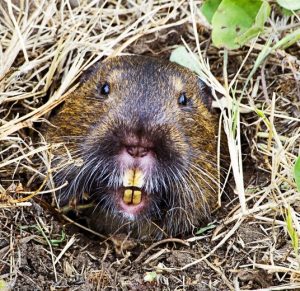 last weeks snow storm because this pest ate all the rooms off the plant.” This is the classic effect of pocket gopher activity and why extermination must be brought onto the field of battle. Gas, traps and poison are the only weapons for long-term solutions against these underground vermin.
Gopher gassers are miniature road flares stuck down into the rodents’ holes, ignited, and then buried. They are extremely effective if gopher activity is caught early, but woefully inadequate for large colonies of these buck-toothed menaces. If you have more than one mound rising in your landscape, it is recommended you move on to measures more drastic than gassers.
Gopher traps are the tried-and-true weapons of hard-core gardeners. They really work, but demand a lot of time and effort to get ahead, and keep ahead of these subterranean 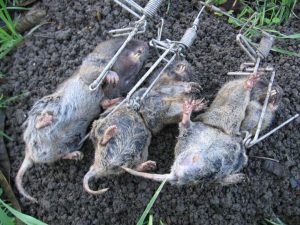 marauders. “At one point in my gopher-killing career, 12 traps were set each morning and again at dusk. Before I could declare my mission successful, my daily average kill was 12 gophers per day for over a month!” Simple math shows this is a lot of pocket gophers on one property. Keep in mind that you never battle just one gopher, but entire families of these pests relishing their destructive paths through your garden.
Traps work, but are difficult to set down in the holes. If none of the enemy enters a trap within 24 hours my suggestion is to move the trap to another hole. When trapping is successful bury the carcass back in the hole where it met its demise.
If gophers have your garden looking like the aftermath of an air raid then it is time to break out the big guns. I know, because at times it seemed these pea-brained ground dwellers had out-smarted me. That’s when I turned to the Gopher Probe, the ultimate weapon! This T-handled tool allows you to administer a corn-laced attractant directly into the labyrinth of tunnels beneath the garden. Here’s my battle plan:
Step one – Level all existing mounds so as new mounds appear you can see where gophers are current are working. The average family of gophers has a house with many rooms that can expand over 150 square feet of garden and lawn.
Step two- Using the Gopher Probe, gently probe around each new mound until you feel the needle’s tip slip quickly into the ground. This indicates you have entered directly into 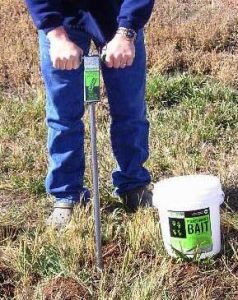 the gopher’s tunnel system. Use the tool’s ingenious handle to release the gopher bait under the soil’s surface. Hidden underground the gopher family feels safe to ingest the delicious corn-laced feed. Before morning they will feel under the weather and put themselves to bed never to chomp again. This may seem harsh, but it’s the most effective way to deal with rodents, and your gopher problems are cured without ever witnessing a dead body. No bodies to deal with, no dead corpus smell, no fuss, and highly effective.
CAUTION – Zinc phosphide is the poison you want to use with the Gopher Probe. The gopher eats the zinc, goes to bed, and never wakens. Zinc phosphide does not keep on killing like strychnine bases poisons. If a coyote should find the body and eat it, there is no secondary kill. Enough said. “Please, please, please stay away from strychnine baits. Strychnine is so dangerous that I would not dream of handling it, much less using it where my dogs and children run free, and where wild birds fly.” Lisa Watters-Lain