The Gardeners Who Planted for U.S. Presidents

FOR IMMEDIATE RELEASE:  The Gardeners Who Planted for U.S. Presidents
(February 12, 2020) Prescott, Arizona

In All the Presidents’ Gardens, Marta McDowell chronicles how the 18 acres surrounding 1600 Pennsylvania Avenue has changed over the decades.

Unlike many ushers, maids, and dressmakers through the decades, few gardeners publish memoirs, so in many cases, the biographical record is sketchy. Perhaps this league of extraordinary gardeners preferred the spade to the pen, but the book is still a very interesting read.  Here are the highlights. 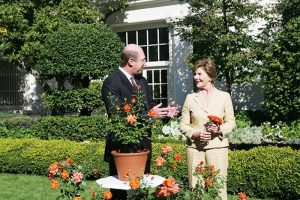 Charles Bizet (1817–1825, under James Monroe) was a gardener who knew three presidents. Born in France, Bizet was working in Virginia by 1810. For the Madisons at Montpelier, Bizet designed a terraced, horseshoe-shaped garden near the house. In 1817, Thomas Jefferson noted in a letter to Madison that “Besey” had stopped at Monticello for seeds. From 1817 until 1825, Bizet worked on the White House grounds. Bizet went back to Montpelier at the end of Monroe’s term.

John Watt (Served 1852–1862, under Franklin Pierce, James Buchanan, and Abraham Lincoln) hailing from Scotland, Watt and his wife, Jane Masterson Watt, were both employed at the White House, he as head gardener, she as its first female usher. In 1857 he was the chairman of the Washington Horticultural Society. He bought palms from greenhouses in New Jersey. He ordered a giant water lily for the White House conservatory from Philadelphia in 1858.

The second of three in a series of Scottish head gardeners at the White House, he stayed only a short time. 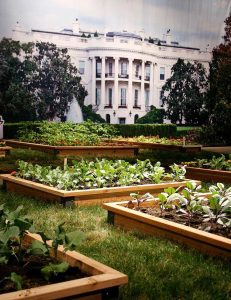 McLeod resigned to open a garden center located on “the road leading from Shaw’s Meeting House to the Baltimore-Washington Turnpike,” what is now Montgomery Road in Beltsville, Maryland.

Alexander McKerichar (Served 1865–1875, under Abraham Lincoln, Andrew Johnson, and Ulysses Grant)   Born in Perthshire, Scotland, he learned the trade as an apprentice in the gardens of the Duke of Atholl, near Dunkeld. In 1856 McKerichar was hired as a foreman under John Watt, taking on the role of head gardener nine years later. Known for his hothouse grapes, he also raised off-season Caledonian cucumbers for President Grant. Like the gardeners before him, he resigned from the White House to open a garden center in Alexandria, Virginia.

George Field (Served 1875–1877, under Ulysses Grant.) The first English gardener at the White House, Field’s floral fame came after he left the White House. He opened a garden center on Georgia Avenue NW with his brother Thomas. Field was responsible for naming and promoting the ‘American Beauty’ rose, originally selected on historian George Bancroft’s estate as ‘La Madame Ferdinande Jamin.’ Field supplied the cattleya orchids for Alice Roosevelt Longworth’s bridal bouquet in 1906. The Washington Post described him as an orchid specialist. He was an active member of the Florist Club of Washington. In 1916, he sold his stock of orchid plants for $15,000.

Henry Pfister (Served 1877–1902, under Rutherford B. Hayes, James Garfield, Chester Arthur, Grover Cleveland, Benjamin Harrison, William McKinley, and Theodore Roosevelt.) A native of Zurich, Switzerland, Pfister trained in the conservatories of a Swiss banker and at the Luxembourg Gardens in Paris. He made his way to Cincinnati and then to Washington, where he was hired under Hayes. Pfister managed the greenhouses, designed and planted the ornamental beds around the White House lawns, and provided all indoor floral and plant decorations, including the wedding of Grover Cleveland and Frances Folsom. He later opened his own florist and landscape design business on Connecticut Avenue.

The son of a landscape gardener in Perthshire, Scotland, where he learned the family trade. In 1850, the family immigrated to the United States. In 1858, Brown took a job in Washington D.C. at the government experimental gardens. During the Civil War, he served with the Army Corps of Engineers in New Orleans. By 1890 he was back in Washington D.C. as a public gardener with the War Department. Brown worked on the Capitol grounds, city parks, and the government propagating gardens and greenhouses near the Washington Monument, as well as the White House. He taught Theodore Roosevelt’s children how to propagate plants in his greenhouses.

Charles Henlock (Served 1909–1931, under William Taft, Woodrow Wilson, Warren Harding, Calvin Coolidge, and Herbert Hoover.) A Yorkshireman, and proud of his horticultural training, having worked for Lord Mowbray in Yorkshire, Lord Denbigh in Warwickshire, and Lord Harrington in Derbyshire before spending five years with the Royal Horticultural Society. Henlock arrived in Washington D.C. just before President Cleveland’s wedding in 1886 and was hired as a foreman gardener at the White House, and grew to the propagating gardens and city parks. Henlock was the White House head gardener in 1909, where he was responsible for the first shipment of cherry trees sent from Japan as well as the successful plantings around the Tidal Basin.

William Saunders Reeves (Served 1931–1945, under Herbert Hoover and Franklin Roosevelt. William Saunders Reeves was the first American-born White House head gardener.) His grandfather, William Saunders, was the chief of experimental gardens for the U.S. Department of Agriculture and founder of the National Grange but is perhaps best remembered for introducing the navel orange. Reeves worked under both Roosevelt’s, starting as a groundskeeper at the White House during the Theodore Roosevelt administration in 1903. Through World War I, he was gardener-shepherd to Wilson’s flock of sheep. Reeves became the head gardener and chief floral designer while Hoover was in office.

Robert M. Redmond (Served 1945–1962, under Harry Truman, Dwight Eisenhower, and John Kennedy.) Born in 1907, the tall, red-haired Redmond started mowing lawns at the White House as a teenager during the Coolidge administration. “Red” became superintendent of the White House Grounds under the Truman administration. Redmond was the last head gardener at the White House also to be responsible for indoor floral decorations. Jacqueline Kennedy appointed Rusty Young to the new post of the chief floral designer in 1961, for his contemporary aesthetics. 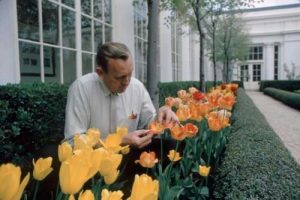 When Rachel “Bunny” Mellon and Perry Wheeler designed the Rose Garden for President Kennedy, they handpicked Williams as their horticulturist to supervise the installation. The son of a West Virginia farmer, Williams, loved plants. He worked for the Park Service in various assignments, including the Baltimore-Washington Parkway and at the nurseries for the National Capital Region. When he transferred to the White House in 1962, he supervised work on the grounds for nine administrations.

Dale Haney (Served beginning in 2008, under George W. Bush and Barack Obama.) Like many of the White House head gardeners before him, Dale Haney was promoted from within. He started as a National Park Service gardener at the White House in 1972 after obtaining a degree in horticulture from Sandhills Community College in Pinehurst, North Carolina. He has been a favorite with presidential canines over the years and is often photographed walking the current first dog. In 2008, he was appointed superintendent of the grounds.

Work on the White House grounds goes on, but these few have led the way at 1600 Pennsylvania Avenue.