Cucumbers just aren’t the same bought from the grocery store wrapped in plastic and coated in wax to shine it up. This crunch garden delicacy is so much more, with dozens of local favorites to choose from. Most gardeners think of cucumbers as green seed filled slices for salads. Long green cucumbers are popular in the home garden, but there are better flavors to choose from. Varieties like English skinny’s, yellow and the exotic Armenian. 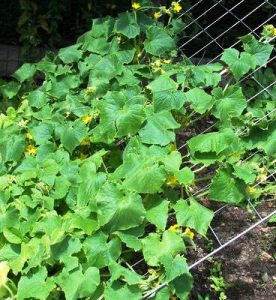 Cucumbers, squash and melons are in the same family of vegetables. A popular way to categorize cucumbers is as either slicers or picklers. Pickling cucumbers can be eaten fresh, but they also hold their texture well in the pickle jar.

vary from 1-2 inches long to well over a foot. There are even round cucumbers. The outer skin is usually green or yellow and can be tender or not. Most varieties are sprinkled with spines that are wiped off easily.

Mature plant size varies greatly with variety. Vining cucumbers can easily cover 4-6′ of ground. Bush varieties don’t travel as far, but they can spread 2′ in every direction.

Harvest – Cucumbers are best harvested slightly immature. Mature cucumbers yellow and become bitter. Seeded varieties develop more of the seed pulp the longer you leave them on the vine. Check your seed package or label for the recommended harvesting size for your variety. If in doubt, pick cucumbers young rather than waiting until the next weekend. This technique also increase the numbers of fruits that form on the vine.

Cucumber vines are scratchy and unpleasant to touch and usually cut from the vine. You can twist the stem and snap the cucumbers off as well, must don’t pull. Pulling cucumbers off the vine can bring the whole vine with it. Garden snips and scissors are a good idea when picking this fruit.

Cucumbers like a slightly acidic to neutral soil pH. It is best to use high acid fertilizers like Watters All Purpose Plant Food when preparing the soil and as a nutrient supplemental throughout the growing season. When turning the garden soil blend this food along with ‘Soil Sulfur’ to one shovels depth insures happy cucumbers that produce.

Cucumbers are easily direct seeded in the garden. You can find cucumber seedlings, but they transplant best when young. Cucumbers are heat lovers. Sow seed and plants well after all danger of frost in the month of May. Cucumbers should be one of the last vegetables sown in the garden, they like the soil warm, even as warm as June plant.

If you are starting seed indoor sow them 3-4 weeks before you plan to transplant. Also, sowing in peat or paper pots lessens transplant shock. Plant seeds about ｽ” deep in a good ‘Seedling Potting Soil’.

Final garden spacing should be about 8-12″ apart. If you plan to trellis your vines, you can leave them a few inches closer. In raised garden beds try planting your cucumbers at the edged of the bed and train vined to spill over the edged.

Give the vines at least an inch of water per week, especially when fruits are present. Don稚 let them sit in soggy soils though.

Vine crops are heavy feeders and cucumbers are no exception. Start with a rich soil and side dress with Watters Premium Mulch once the plants start blooming. Give them another dressing or dose of All Purpose Food about 4 weeks later, in mid-season.

Marketmore – One of the most prolific, easy growing varieties.

Lemon – A round, pale yellow heirloom. They have a generous amount of seeds, but they’re nice scooped out and used as an edible serving bowl. One of my favorite small fruits.

Armenian – Thin skinned and crunchy. Can be stripped or ridged. Great flavor and easy to eat.

Bush Champion, Spacemaster, Bushmaster– Anything with “bush” in its name is great for growing in containers.