From the Top Brass to a touch of sass, it’s never a dull moment with Watters’ 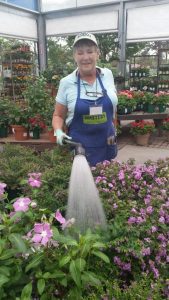 What do you do if you’re in an elevator with J. Edgar Hoover? “You stand up really straight and pretend to be invisible,” according to Christy Wilson. Christy’s story is as fabulous and colorful as the plants she cares for at Watters Garden Center. Her love for plants just might be genetic, since her grandfather owned a nursery in Columbus, Ohio.  In 1948, her family moved from Columbus to Yuma to be close to relatives and escape the bitter winters. Christy describes the Yuma of her childhood as an agricultural paradise, with miles of citrus trees and a line of palms from the river to downtown. Kansas City came after high school, and Christy enrolled in airline school. Undaunted by being told she was “too short” to be an airline hostess, she trained as a reservationist. She says companies hired from schools in the area because students had to pass background checks. One of those companies was the FBI, and Christy was hired as a file clerk, no matter how tall she was–or wasn’t.

Washington DC was the backdrop for Christy’s time with the FBI. She remembers the shouts of Vietnam War protesters cut short by a boom as the Department of Justice building’s heavy security doors slammed shut. Clerks walked more than twenty miles a day and weren’t allowed to take elevators with the public. When finally able to take an elevator, she leaned back against the wall, exhausted. As the doors opened, in walk two “big, GIANT body guards and J. Edgar himself. It was so cool.”

After nearly a year with the FBI, Christy’s boyfriend was discharged from Vietnam. They 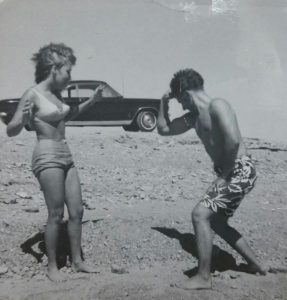 moved to Texas, married, and had two daughters. She credits her faith in God for steering her to Prescott, where she’s lived the last sixteen years and now has three grandchildren. As a driver for Tenderhearts, a local non-profit, she drove hospice patients throughout the southwest to be with their families. She waited tables for 32 years, where she perfected her “sassy attitude.” She laughs as she describes herself as “a jack of all trades, but master of none.” We disagree, Christy! As someone who nurtures people and plants, we think you’re amazing, and are so proud you’re part of the Watters family.