‘Monsoon Madness’, ‘Sizzling Summer’, however the sales are billed, this is the time to watch your local garden centers for end-of-season bargains. These sales are necessary to clear out the passing season’s plants to make room for shipments of new fall stock. 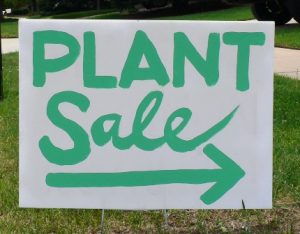 Here at Watters Garden Center we call this annual clearing-out our ‘Monster Monsoon Sale’. It lasts through a couple of weekends as the “new” trees and shrubs arrive. It’s the wise gardener who takes advantage of some irresistibly good bargains.

The best savings of the year are to be had in the next few weeks. Expect at least 25% to as much as 65% off. (I’ve been known to give away plants when I know they’re going to a good home!)

Scoop up the deals as early as possible. Because savvy gardeners know to take advantage of these between season sales, the limited quantities go fast.

If you’ve been considering a landscape addition to create more seasonal excitement in the garden, now is the time. Labor Day is the official start fall planting in our area, and that means that there are two months left of our growing season. Whether planting some of the past season’s stock or new arrivals, the plants have plenty of time to develop extensive root systems before winter. A perennial’s chance at success definitely is increased when planted during the monsoon season. Many that bloom in late summer and autumn are especially happy when planted this time of year. With the exception of mums, nurseries DO NOT want any perennial plants left as they transition into the autumn planting season. So, if the plant you want isn’t on sale, ask for a discount. Nurseries are remarkably receptive to giving you “a deal”, especially when you offer to take home more than one plant.

Sun-loving perennials that do really well in local gardens: 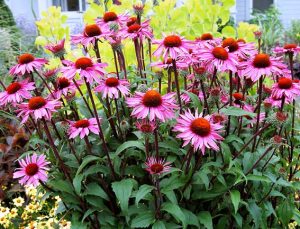 Merlot Coneflower, Echinacea purpurea – A well-behaved plant with bold 5” merlot-rose flowers. Its natural home is with other perennials in a flower border, but this reliable plant also is good planted individually out by the mailbox. The character of this knee high plant is right at home in the mountains, so it does well in wild gardens with native plants. It’s an excellent source of cut flowers. 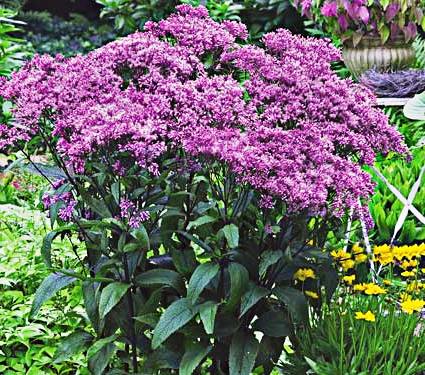 Joe Pye Phantom, Eupatorium – When in bloom, “impressive” is the only way to describe this 3’ high perennial. So sun-hardy it can be used in the native garden or as a backdrop to a rock garden. Sturdy and upright the plant is covered with lavender blossoms from summer through autumn. The delicious vanilla scent is pleasing to the human sense of smell and a magnet to butterflies. 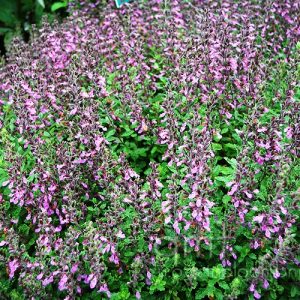 all Germander, Teucrium chamaedrys, – Rich rosy flowers are an attractive contrast against the dense, deep aromatic leaves of this easy-care plant. It blooms all summer long in water-wise gardens and is a carefree informal filler around larger shrubs and perennials. Even where there’s a thick population of nosy deer!

Shade-loving perennials that are star performers in our area:

Brilliance Autumn Fern, Dryopteris erythrosora, – One of the few ferns that grows well locally, this handsome selection has coppery-red new foliage that is a brighter and a significantly more dramatic red than other ferns. The bold leaves mature to deeply cut dark green. Its spectacular autumn colors illuminate the landscape, and the plant comes back for another showing every spring. 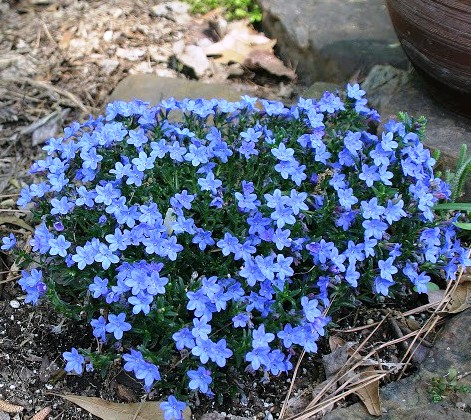 Crème Brule Heuchera – A breakthrough in heuchera breeding! In both spring and fall, the chartreuse foliage has a heavy smattering of brick red coloration that radiates out from each leaf. During summer’s months the leaves lighten with a silvery overlay. Although it’s grown for the fantastic foliage there are cream-colored flowers that appear in midsummer. It is one of the few evergreen perennials during milder mountain winters, but it also loves heat.

Garden Alert – Swarms of black, one-inch-long beetles are hitting gardens in Paulden, Chino, and Prescott Valley. Reports of ‘Blister Beetles’ have attacked potato crops, birds of paradise, ash trees, and many other landscape shrubs. My frustration with this pest led me to create a solution to combat this wretched little eating machine. Fight back by spraying this insidious insect with my “Multi-Purpose Insect Spray”. The death is immediate; you actually will see bugs dropping as they’re sprayed with it!