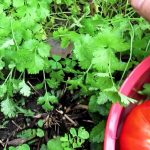 Cilantro is a favorite herb in Southwestern cooking and in Mexican dishes, but with this herb you get two herbs for the price of one. Generally referred to as coriander, the leaves are eaten fresh and called cilantro. The seeds have an entirely different flavor and are called coriander.

The leaves have a minty, cool, and grassy flavor. They are  popular in many ethnic dishes, particularly in India, Mexico, and China. The seeds can be used whole or ground, and frequently are used in curries, pickles, and sausages. Their flavor is more of a floral musk with a hint of citrus.

Coriander is part of the carrot family and has the familiar flat, umbrella flowers.  The leaves at the base of the plant are fan shaped and resemble a parsley leaf. As the stem grows, the leaves become much thinner and feathery.  Usually the flowers are white, but some varieties trend to pink. The seed is round and hard.

Hardiness – Cilantro is classified as an annual. When days lengthen and temperatures 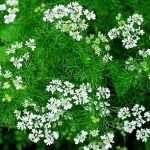 rise in June and July it will bolt quickly to seed.

Mature Plant Size – Most varieties grow 12 inches tall and branch out as they are harvested, to a width also of 12 inches.

Days to Maturity – Leaves grown from a plant start should be ready for harvest within 50 days.  Growing the  herb from seed will take longer, usually about 100 days to maturity.

Suggested Varieties – Very often seed packets are labeled ‘Cilantro’. However, as the herb has become more popular, there are a few named varieties that are worth pursuing  Some of my favorites are ‘Santo’ and ‘Marino’ because they are slow to bolt and are very tasty.  ‘Festival’ is a  quick grower with larger leaves. Some years it will overwinter in some zone 8 garden spots.

Harvesting and Using – Both coriander and cilantro are versatile herbs. You can harvest cilantro leaves once the plants are about 6 inches tall.  Pinch portions of the upper stem and the plants should branch out offering more leaves. If your plants should go to flower don’t waste them, as even the flowers are flavorful and edible.  Cilantro is delicate and should be used fresh. The best way to store cilantro leaves for future use is by freezing them.

The seeds can be harvested green or dry. I find the taste a bit fresher in the green stage. Seeds can be stored in the refrigerator for several weeks or frozen for longer storage. Some gardeners wait until most of the seeds have dried and turn brown. They then cut off the entire seed head and keep it in a paper bag until the seeds come loose. They then can be stored in an air tight container, then ground as needed.

The seeds are staples of curries and ethnic stews. They frequently are paired with cumin, but are fun to play with in culinary experiments. Coriander works with everything from beans to pork and fruits to vodka.

Soil: Cilantro will grow in just about any rich soil. Since it grows so fast, give it lots of compost, manure, or other organic matter.

Sowing: You can sometimes find seedlings of cilantro, but it usually is started from seed indoors, 4 – 6 weeks before the last frost date. However, plants started indoors can be difficult to transplant.  Best results seem to be with seeding directly into the garden 1–2 weeks before the last frost date. Succession plant a new batch every couple of weeks to prolong harvest and take advantage of cilantro’s short season.

Although cilantro is a cool weather herb, it is still frost sensitive. Keep some kind of frost cover handy and protect the plants if extreme weather is predicted.  Gardeners in USDA Zones 8 and up will have better luck with fall sowing, with succession sowing into winter. Even colder, higher altitude gardens can start seed in late summer, to harvest through last frost.

Cilantro/Coriander seeds are actually fruits that contain 2 or more seeds. That means that more than one plant will come from each seed. Seedlings may be thinned or left to grow as they appear. This herb is short lived, so the plants usually don’t live long enough to crowd out each other.

Maintenance – The biggest challenge growing cilantro is that it seems to bolt the minute harvesting begins. That’s because cilantro responds to the amount of daylight it receives. It is slow to grow during the short days of spring or fall, but the long days of summer signal it to set flowers and go to seed. The plant can be stalled from flowering by giving it some shade, keeping it well watered, and frequently harvesting the leaves.

The only way around this summer bolting is to succession plant in the garden at 2-week intervals.  These plants still will go to seed, but if plantings are staggered, several good harvests can be expected from each planting.

Pests and Problems – The plants aren’t around long enough for diseases to be a problem. They may get aphids or white flies if the plants are crowded or stressed, but expect the plants to be virtually problem free. Even deer don’t like cilantro.