7 Vegetables with the Largest Harvest

If you have a limited growing area this season, or if you simply want more produce from every square foot of plantable space, here is my list of the 7 Best Producing Vegetables a gardener can grow.  The planting season varies by variety so check Watters Local Gardening Calendar for exact planting dates.  The best producing plants are below, and the list begins with potatoes.

Potatoes – Huge Harvest Beneath your Feet 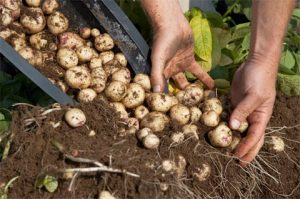 Potatoes go about their business underground while the gardener hopes for the best from a process he cannot actually see. Fortunately, in the right soil, potatoes deliver without disappointment.  Give them a bed of loose, fluffy soil to reach down into and root and they will form potatoes with abandon.

Don’t be in a hurry to plant your potatoes in the garden. Wait for the spring thaw, and then plant from March through April.  Savvy local gardeners use the first dandelion blooms in spring as their signal to plant potatoes.

When first planted, keep the soil moist, but not soggy. For an ideal crop, make sure the plants get regular water when in flower. That’s when new potatoes form. Start cutting back water as the vines decline; this cures your potatoes before the harvest.

A 10-ft. row with plants spaced 12-18 inches apart will yield up to 30 lbs. of potatoes, depending on the variety of potato planted and its gardening conditions. 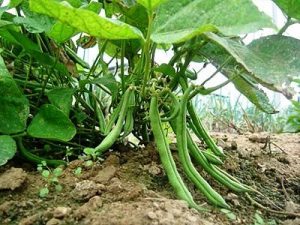 quickly, but pole beans need to be sown only once and continue producing an abundant harvest through October. You easily can produce 5 lbs. of bush beans from a 10 ft. row. Expect upwards of 10 lbs of beans from a comparable row of pole beans.

Greedy Harvest Tip –  Harness the productivity of both types of beans by planting them both at the same time in spring.

Vining cucumbers are very generous producers. If you want to make pickles, that’s a good thing; you’ll have enough to make as many jars as you need. If you only eat cucumbers in salads, there’s a limit to how many you can consume, so don’t plant any vining varieties. Bush cucumbers tend to produce less fruit than their vining cousins.

Three to four vines can easily provide 10 lbs. of cucumbers. Cucumbers begin to decline by mid-season so it’s best to seed a second crop in mid-summer so the harvest continues through autumn.

Cucumbers are best picked on the immature side; if they are allowed to get fat, they will produce a seedy, bitter harvest.  If you leave cucumbers on the vine past their prime, the vines stop setting flowers and fruit.  Cucumber vines have both male and female flowers, with female flowers doing all the work to set fruit.  The flowers need to be well pollinated, but are open only one day.  Having multiple plants ensures more flowers will be open on any given day.

~ More on Cucumbers in Vining Abundance ~

Okra is best planted in the garden as the heat of the season begins, from the end of May through June.  Of all the vegetables, this is one to stay on top of, even more so than beans. Harvest frequently as overgrown okra pods are not only tough to eat, they cause the plants to shut down and stop producing more pods.  Considering how prolific okra plants are, that’s something you would think to be impossible!

Plants produce a greater yield during the long hot seasons of summer, and increase production as the monsoon rains arrive in July.  Expect a 10-pound harvest from a 10-ft. row with plants spaced 18 inches apart.

Tomatoes – There Can Never Be Enough 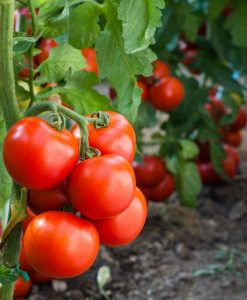 It can be a challenge waiting for the first ripe tomato of summer, but once they start producing tomatoes, the supply is steady. The type of tomato grown, its growing conditions, weather, and your attentiveness as a gardener affect the harvest.

Large beefsteak tomatoes tend to set less fruit than smaller tomatoes, but they keep up the harvest. Cherry and grape tomatoes give you the greatest quantity, but not a large yield.

In mountain gardens, medium-sized varieties are the best producers.  These include early girl, celebrity, lemons, champion, Ace varieties and the like.  These medium-sized fruits produce early, often, and pound for pound yield more fruit than any other plant in the garden.

In good seasons, you can see as much as 20 lbs of fruits per plant. In general though, it’s more realistic to expect about 10-15 pounds.

Welsh onions are a perennial variety, which makes them popular choices for most gardeners. They do grow a bulb, but it’s the green tops that are harvested. Plant or seed them like bulbing onions, but use the green tops like scallions or spring onions.  What makes them so prolific is that the tops grow back amazingly fast. Within a few weeks of harvesting, they’ll be ready to harvest again!

While you need to plant continual successions of scallion onions, Welsh onions require no effort other than the harvest. Even if they are allowed to go to seed, simply cut back the plants to within a few inches from the ground and they will re-grow at an alarming speed.

The down side to perennial vegetables, like asparagus and rhubarb, is the permanent space devoted to them. Luckily, Welch onions can be harvested all year long.

Zucchini – the Fruit that Feeds the Neighborhood

Due to overzealous planting of zucchini, gardeners have been asked to drop off baskets 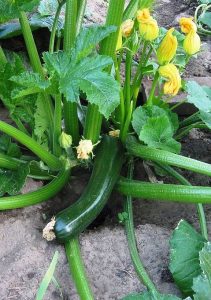 of the squash on neighbors’ doorsteps on August 8th, now known as Sneak Some Zucchini onto Your Neighbor’s Porch Day. Three to 5 plants can easily yield anywhere from 20-40 lbs. of fruit. Even at the low end, that’s a lot of squash!

To get a great yield, you need to harvest regularly. These are best picked when 8 inches long or less. If fruit is left on the vine, the vines stop setting flowers and no more squash will be produced.

This is especially true of zucchini, because it needs both male and female flowers in order to produce fruits, and both have to be in flower at the same time. Squash blossoms are only open for one day.  Only the female flowers produce fruits and they need to be pollinated multiple times, to produce viable fruits. If you’ve ever noticed zucchini shriveling while still small, it probably wasn’t pollinated enough.  Planting several plants close together in the garden increases pollination, and, therefore, the harvest.

Until next issue, I’ll see you at Watters Garden Center.

2 Replies to “7 Vegetables with the Largest Harvest”