Beans come in a variety of forms, but it’s the green bean most recognized in the restaurants. Hot, cold, or raw in salads, string beans are versatile in the kitchen and very prolific growing in the garden. 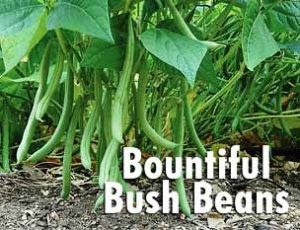 Green bean plants are either pole varieties or bush. You will find purple, red, yellow, even streaked varieties, but green beans are the most popular. These beans are several inches long and either round or flattened in shape. They are picked young and tender, before the seeds inside have fully developed. Most popular varieties have been bred to have stringless pods, but many gardeners prefer the flavor of the old-fashioned ‘string’ varieties, so we keep stocking them here at Watters Garden Center.

Maure Size: Bush beans generally get about 2′ tall and 1′ wide. Pole beans can grow upward or across a trellis for a good 10′.

Exposure: Full sun in the garden produces the highest yield. You will need at least 6 hours for a good crop of beans. Beans tend to stop flowering in the extreme heat of summer and shade might seem like a good idea, but keep them watered and it should be enough relief. Beans resume flowering as soon at the monsoon rains arrive in July.

Pole vs. Bush Bean Plants: Bush beans begin producing before pole beans and often come in all at once. Succession planting a new row every 2 weeks, will keep your bush beans producing longer.

Pole bean vines need time to grow before they start setting beans. They produce later than bush beans, but continue to produce into the autumn.

Important – harvest new beans before the form seed inside the pods or your vines will stop flowering.

Harvesting: is an ongoing process and the more you pick, the more beans will set. You can start to harvest anytime, but gardeners usually wait until the beans begin to firm up and can be snapped, but before you can see the seeds inside bulging. They are generally about as thick as a pencil at harvest. Don’t wait too long, because beans can become overgrown and tough almost overnight.

Planting: Beans are generally direct sown into the garden, although you can transplant small bean plants as well.

Important – don’t plant beans before May. Beans rot in cool damp soil. To get an earlier start, you cover your garden soil in clear plastic to increase soil temperatures and use an inoculant. Plant after all danger of frost is past in May

Plant the seeds 1-2 inches deep and be sure to water the soil immediately and regularly, until they sprout.

Bush beans can be planting in single rows or by broadcasting seeding in wide rows with about a 4 – 6 in. spacing between plants.

Pole beans will need a support to grow on. Be sure the trellis, teepee or fence is in place before you seed. Seed about 6 seeds per teepee or every 6 inches apart.

Maintenance: Pole beans may need some initial help in climbing. Coax your vines up the trellis, until able to twine themselves.

Keep bean plants well watered, or they will stop flowering. Beans have shallow roots, so adding a 2 inch layer of Watters Premuim Mulch over the root area keeps them cool and moist.

Pole beans produce over such a long period they benefit from additional feeding or a side dressing of Watters deodorized Barnyard Manure just as the monsoon arrive in summer.