Pine Needles Bad for Our Gardens?

If you live in a neighborhood where ponderosa pines grow freely, you know about too 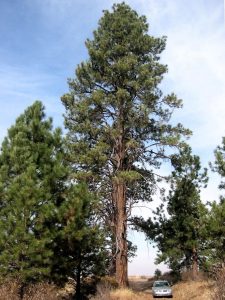 many pine needles.  Pine trees drop lots of needles, especially those 50-foot giants!  Gutter guards protect my rain gutters, but I still have piles of needles on the ground. What is to be done with all these needles???

Are pine needles good or bad for our gardens?  After reading this column you just may want to strike a deal with a friend who owns several large pine trees.

For years we’ve heard that pine needles should be used only around acid-loving plants. Since the needles themselves lean toward being acidic, it would seem to make sense that they acidify their surroundings. Right?  Not true. Pine needles do not acidify garden soils.

Many things, such as climate, rainfall, irrigation water, and the soil itself influence soil pH.  However, top dressing, or mulched materials break down so slowly that they hardly make a difference to a soil’s pH. The acidity of pine needle mulch remains at the soil’s surface and does not alter the soil around plants’ roots.

Are Pine Needles a Good Choice for Mulching?

Pine needles are a good choice for mulching, and really economical if you have pine 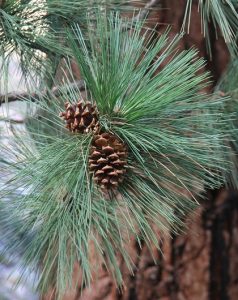 trees in your yard or pine straw easily available locally.  Because pine needles break down so slowly they are not good additives to turn directly into garden soils.  Best to use them as a top dressing on flower gardens, around roses, and places where weed and moisture control are desired.

What is Pine Straw?

Pine straw is the name given to pine needles when they are used as top dressing mulch.

Despite our local concentration of pine forests, rarely is pine straw offered for sale. But if you can get your hands on some, whether commercial product or your neighbor’s surplus, pine straw makes excellent and inexpensive mulch.

Negatives of too many Pine Needles

No matter their drawbacks, I collect and use pine needles for my gardens.

How to Use Pine Needle Mulch

Use pine straw just like any other mulch. Spread it around trees and shrubs and use it to dress your garden beds. Just remember that a 2” layer settles down to a layer of about 1” inch.  My experience recommends putting down a 4” layer of needles.

Shake and toss pine straw the way you would regular straw, so it forms a fluffy layer.

If you already have native pines and junipers on your property you know how thick the layers of needles can be.  To reduce wildfire risk rake up the light fluffy layer of needles, but leave a 2-4” layer of needles around the trees’ drip lines.  This will ensure that your trees remain moist, while reducing native weeds and infestations of bark beetles.

Pine trees need some needles at their bases to protect their health.  Give the rest away to friends and fellow gardeners in the neighborhood.

Recommendation – If you are fearful of wildfires and just can’t leave an insulating layer of needles behind after cleanup, try using a 2-4” layer of shredded cedar bark or composted material instead.  Composted material and bark products don’t burn as easily as pine straw.  Use collected pine needles around fire- resistant plants like roses, lilacs, rhododendrons, azaleas, and distyliums.

18 Replies to “Pine Needles Bad for Our Gardens?”