Safe Compost: What to Use

Adding compost is the best thing you can do for your garden, right? I think so and so do 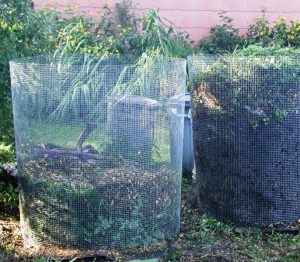 many other gardeners.  But there are some cautions you should take when making and using compost.  There are all kinds of residents in your compost pile, some welcome allies in the compost making process. Worms, microbes, and even some bacteria are all part of the process. But there are other critters you don’t want to inhabit the pile.

Mice and Rats, if in or near your yard, sooner or later will find your compost pile. Since they can spread disease, not to mention ruin the balance of your pile, you certainly don’t want them using your compost as a diner. The only way to keep them out is to set your composter or pile on a sheet of hardware cloth or some other wire mesh with openings no larger than 1 inch.  You also must wrap the fencing around the outside of the bin or pile.

Wasps have an uncanny ability to find sheltered spots to build their nests. (I constantly am checking awnings for signs of a new nest.)  An eye also must be kept on composters, especially in dry weather. Wasps seem to favor wooden bins, maybe because they don’t get as hot as plastic.  Keeping your compost moist should help deter this pest. If your bin is covered, try to hose it down at least weekly.

Ants, especially the tiny ones, seem to be everywhere in the garden. Most don’t do any harm to your plants, although they can bite if their nest is disturbed.  If you prefer that ants not set up housekeeping in your compost, keep it moist.   Like wasps, they look for safe, dry places to settle. Change the conditions in your bin and ants will be forced to find other places to nest.

Flies are a fact of life when you’re dealing with food scraps.  Whether it is fruit flies homing in on your watermelon rinds or true flies that don’t discriminate when it comes to food, the best thing to do is cover the food scraps with plant material. A layer of brown leaves or a topping of grass clippings help mask the temptations that lie underneath.

Fungi and Molds are to be expected.  However, there are types that can pose a risk to your health, as well as to that of your pets. Some molds are more likely to occur if you add things like bread and meat to your pile, so it’s best not to add any of these foods.

Leaf mold can produce Aspergillus fungus and some people are especially sensitive to inhaling the spores. The spores have to be present in high numbers to create a health problem; yet, even so, most people will not be affected. A British gardener died from contact with the spores in 2008, but this is a very rare occurrence. The man’s doctors said that while such an extreme reaction to the fungus was rare, it could be considered an ‘occupational hazard’ for gardeners.

Safe or not safe to compost:

Pet Waste – Cat and dog waste can contain parasites that are harmful to humans. Don’t compost these, even for use on non-edible plants. However, droppings and bedding from small pets on plant-based diets, like gerbils, hamsters, and rabbits are considered safe to compost.

Newspaper – Most newspapers use soy-based inks that are acceptable for composting.  But avoid the glossy inserts, which get their bright colors from metal-based inks. If you want to know what type of ink is on your newspaper, call its office. This is a common question and the publisher will be happy to tell you the type of ink that is used.

Newspaper is safe to compost, but it takes a long time to biodegrade. If you’ve ever used several layers of newspaper to smother weeds under mulch, you already know how long it remains intact even when in contact with the soil.  That’s because newspaper is a plant product and contains lignin, a substance from the plant’s woody cell walls that breaks down slowly.  Individual sheets of paper torn or shredded definitely compost more quickly.

Cooked Food – The main reason meats and oils are not recommended for composting is that they are open invitations for rodents and other pests. The old Native American technique of burying fish heads in the garden is a much better way to compost seafood and heavy proteins.

The cells of cooked vegetables begin to break down rapidly, which means they quickly start to rot and to smell. The odor may offend you and me, but it is irresistible to rodents and flies. If you really want to add them to the pile, try masking the odor by covering the vegetables with plant matter and some garden soil.

Rhubarb Leaves – Gardeners are cautioned not to eat the leaves of rhubarb or even the stems once the plant has been hit by frost.  Rhubarb leaves contain levels of oxalic acid that can be toxic to humans, but adding a few leaves at a time to your compost poses no threat.  Just don’t lift and compost the entire patch of rhubarb all at once.

4 Replies to “Safe Compost: What to Use”